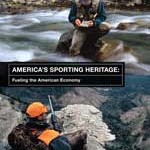 Every five years, upon the release of the U.S. Fish and Wildlife Service’s National Survey of Fishing, Hunting and Wildlife Associated Recreation, the Congressional Sportsmen’s Foundation has used the data to tell a compelling story about the economic impact of hunters and anglers. In 2012, Jodi served as project manager for CSF’s sportsmen’s economic impact report analyzing data, researching comparisons, writing the national report and fifty state reports, managing the creative design process, and coordinating the press rollout. The 2013 report, America’s Sporting Heritage: Fueling the American Economy, continues the trend of providing elected officials and the outdoor industry with “sound bites” that help tell the story of the importance of hunting and fishing throughout the national economy. This project included organizing a session at the National Assembly of Sportsmen’s Caucuses and a media release at the Shooting Hunting and Outdoor Trade Show.